Within the Education Revolution lies another, thus far quieter revolution that attempts to raise the profile and status of First Peoples’ culture in this vital sector of the Australian cultural complex.

Two Way Teaching and Learning addresses the coalface of this revolution where two cultures meet; in the classroom, the school, the community, and in both state and national education curricula. Contributors are mostly highly experienced Indigenous practitioners drawn from academia, the teaching profession and the community.

They put the spotlight on policies and processes that serve to either facilitate an informed, respectful relationship in education, or act to reinforce cultural inequity and inequality. Policy implications that can be liberating or devastating for Aboriginal and Torres Strait Islander students in Australian school systems are exposed and explored with forensic care. Each practitioner articulates specific problems, and offers practical strategies that make a difference. 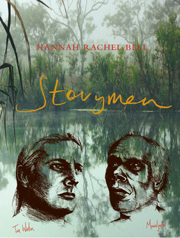 What do the artistic works of acclaimed author Tim Winton and eminent Ngarinyin lawman Bungal (David ) Mowaljarlai have in common? According to Hannah Rachel Bell they both reflect sacred relationship with the natural world, the biological imperative of a male rite of passage, an emergent urban tribalism, and the fundamental role of story in the transmission of cultural knowledge.

In Bell’s four decade friendship with Mowaljarlai, she had to confront the cultural assumptions that sculpted her way of seeing. The journey was life-changing. When she returned to teaching in 2001 Tim Winton’s novels featured in the curriculum. She recognised an eerie familiarity and thought Winton must have been influenced by traditional elders to express such an ‘indigenous’ perspective. She wrote to him. This resulted in 4 years of correspondence and an excavation of converging world views -exposed through personal memoir, letters, paintings and conversations and culminating in Storymen.

David Mowaljalai embodied 60,000 years of culture that is of this country where we try to make our home. He was a bridge. He always knew this, and always treated black and white the same. One day he will be seen as the man who carried Aboriginal wisdom into the Australia of the future, the Elder of us all. Tim Winton listened to this voice. Hannah Rachel Bell knew it needed to be written down, and shared. Storymen is a heck of a book.

• Follows an Australian Aboriginal boy and girl from childhood through adolescence, adulthood, old age, and death, contrasting their experiences with those of ours at the same life stages

• Presents the experience of living in a society in which every action is governed by the gender laws of nature and myth, and offers us ideas for the conduct of our lives

For thousands of years the Ngarinyin Aboriginal culture of Australia has existed with almost a total division of responsibility between genders. This division enables both men and women to respect the power, wisdom, and essentiality of the other because only when the two genders work in harmony does their culture function as it should.

When Hannah Rachel Bell, a committed activist and feminist, first encountered this culture in the 1970s she resisted such blatant gender division. But over her 25-year collaboration with the well-known Aboriginal Lawman David Mowaljarlai she found her beliefs challenged and finally changed. In this book Bell presents the experience of living in a society in which every action is governed by the laws of nature and myth, rather than those of commerce and politics. She offers modern people ideas for the conduct of their lives by raising awareness of the cultural processes and institutions that affect men’s and women’s authority, sovereignty, and the fulfillment of their birthright. It is a journey that, if traveled collectively, could change the direction and experience of modern culture.